In Rialto for Short we offer up-and-coming talent a stage on Tuesday evenings every three months. Filmmakers then get the chance to show their short film on the silver screen. All sorts of films can be seen, closely taking diversity in account; every genre and theme is welcome. Edgy & rebellious? No problem!

At this moment Rialto has only got room for a limited number of people. The reason is obvious. But there are probably a lot of people who want to view the nice selection of this program. That is why we do our best to show Rialto for Short returns to your home with a special online screening.

Mien Vreejheid (My Freedom)
Dobber Bolhuis | Netherlands | 2020 | 10' | Dutch spoken | English subtitles
This short documentary tells the story of four adolescent girls with different backgrounds and their struggle with discrimination, prejudice and accepting who you are. During the rehearsals of their theatre performance, they throw off all shades and it becomes clear what freedom means to them. The beautiful camera work by Jaap Mar Diemel and the atmospheric score by Thymo Boog enhance the girls' story.

When I saw a call for the 148-hour docs competition at the end of 2019 through the Limburg Film Festival, I was immediately interested. I was still studying Production at the Dutch Film Academy at the time, and saw it as an opportunity to experience the other side of the making process, that of documentary directing. With a couple of young film professionals, we took up the challenge. This led to the short documentary Mien Vreejheid.

Each team was assigned a square on a paper map of Venlo where they had to look for a subject. I had never been to Venlo before, but I knew that with only six days to produce a film, we had to find a subject in about a day and a half. When we went into a theatre, and spoke to the director, she mentioned that one of the shows they were rehearsing was a group of young girls from various backgrounds who were rehearsing for a play in which they were turning their personal stories into theatre. This caught my attention because it has so much in common with documentary storytelling.

Because the young actresses were already in a process of reflecting on their lives, the step to tell this on camera was small. They were immediately willing to be filmed, and so it came about that in such a short period of time we got a lot of openness from the protagonists. I am still grateful for the trust that we outsiders received from them in such a short time. I think you can see that in the film and maybe it was also the reason why we won the competition prize at the Limburg Film Festival. The emotional release for both the girls and our team was enormous.

I have learned a lot during this process and I am very happy that I was surrounded by a strong team who guided me so well in this trip to directing. Sometimes the cameraman would suggest a brilliant shot that I didn't see or I would think the material was useless, but the editor would cut it into a sequence in no time. It opened my eyes and as far as I was concerned this was a real team effort. I would participate again, because I notice that you grow enormously when you are forced to tell a documentary story in a limited time. I am very much drawn to this. 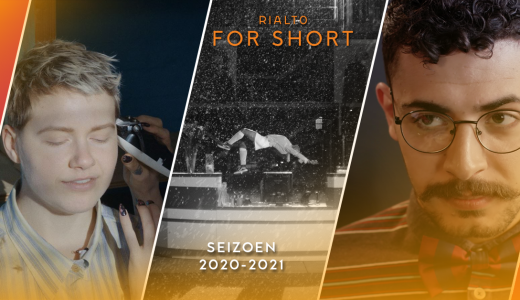 Rialto for Short
A program that gives novice filmmakers the opportunity to show their work.
Read more