The Swallows of Kabul

How do you ensure that a film about the Taliban becomes more than a one-dimensional indictment? To achieve this, French actress and theatre & film director Zabou Breitman sat down with likewise French animation filmmaker Eléa Gobbé-Mevellec. In their immersive animation film based on a novel by Yasmina Khadra, they paint in beautiful watercolour hues an occasionally harsh world populated by authentic, layered characters. In order to better relate to the drawn characters, the film was shot with the voice actors dressed in costume.

Kabul, 1998: the Taliban have seized power, which has far-reaching consequences for young, liberal-minded teacher Mohsen and his striking wife Zunaira. Mohsen's dream of becoming a diplomat has been shattered, while Zunaira is allowed to walk the streets of Kabul only when fully veiled. Then there's Atiq, a jailer who guards people who have been sentenced to death. His wife, Musarrat, is terminally ill. Following an unfortunate event, the lives of these four people become tied together.

ZABOU BREITMAN (1959, France) started her film career in Elle voit des nains partout! (1982), going on to act in films such as Banzaï (1983) and La Baule les Pins (1990). In 1992, she acted in the play and film version of Jean-Pierre Bacri and Agnès Jaoui’s Cuisine et Dépendances. She made her directorial debut with Se souvenir des belles choses (2001). 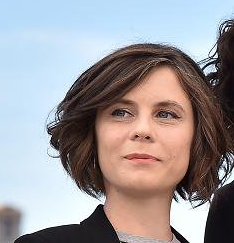 ELÉA GOBBÉ MÉVELLEC (1985, France) studied animation at the Ecole des Gobelins. Her shorts Madame (2006) and Escale (2010) screened at the Annecy festival. She has worked as a graphic designer and animator on shorts including César nominee Bang Bang! and the animated series Lastman (2016). The Swallows of Kabul (2019) is her first feature film as a director.